The Vallelujah enduro is now in it's third year and is synonymous with causing a storm in the Tweed-valley, in more ways than one but mostly the weather.  This year however was to be third time lucky as the valley was bathed in wall to wall sunshine and 16 degrees, it was real taps aff Scottish grab it while you can summer weather.  This the first race of the triple crown which includes the big International event on June 9th - 11th and wrapping up with the Whyte king & Queen Scottish champs in August 19th - 20th.

In the past this race has visited Yair Forest, Cadmuir and Glentress and back to Glentress for this year. Start/Finish was in the grounds of the Hydro Hotel just a stones throw from the end of stage 4. It was a fairly tough old 30km loop for the 4 stages bearing in mind if you did all on the Saturday practice then at race pace on the Sunday. 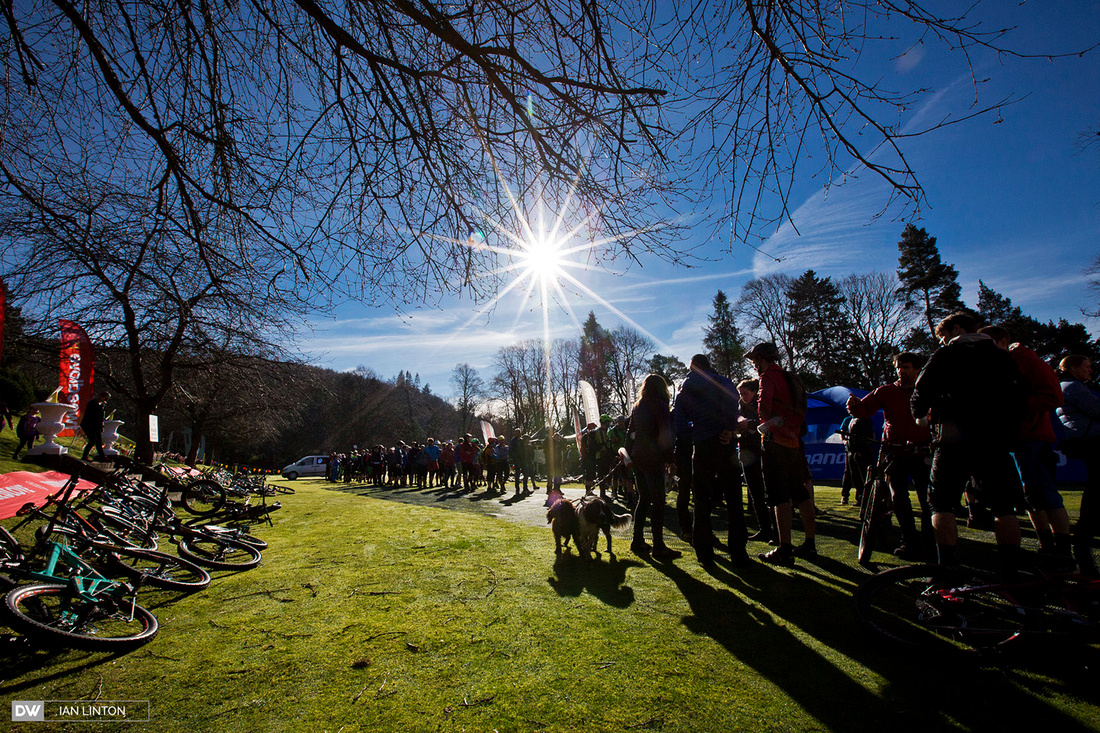 Saturday morning sign on queue and not a moan or a groan as the suns out and everybody’s meeting up for what probably was their first race of 2017, exchanging stories from the winter training or the lack off in my case, and showing of the new bling and bikes. Near on 500 riders signed up for this race can only mean that Tweedlove are doing something right in how they organise and run events. 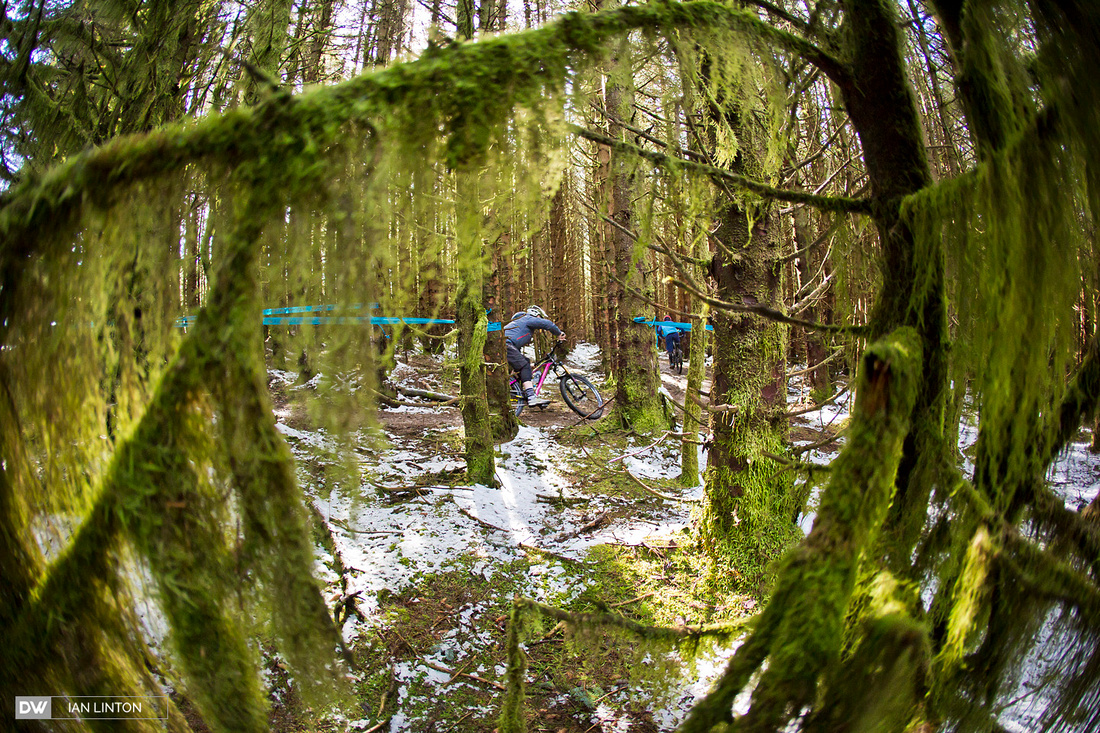 After the long haul up to the boundary trail where the start of stage 1 and 2 were you were greeted by the sight of the previous weeks winter weather. Stage 1 started on the newish Carls Lane trail which sweeps through the tight moss covered fire trees down towards Spooky Wood into shallow grave. From there you had a nice bit of natural single track that spits you back onto the bottom of Spooky Wood. Hard left at the end of Spooky and down into Mud and Roots a minute’s worth of sweet techy riding and your done.

Here we have Tweedlove’s new sponsored rider Ben Balfour enjoying that very Mud and Roots trail, Ben is only 15 and already showing he can ride with the best in the valley. He was to finish up the weekend in 2nd place only a tenth of a second back on Corey Watson

The flat swoopy berms on Carls Lane catch many riders out as the trail winds it’s way down through the tall moss covered Sitca spruce trees, as did the odd patch of snow.

I thought I’d better include this pic of Angus Hardie boosting the jump into the bottom section of Dave’s trail on stage 4 during practice. Sadly the young gun went home on the Saturday night after practice and managed to burst his collar bone in a riding accident, hope the break heals quick dude. 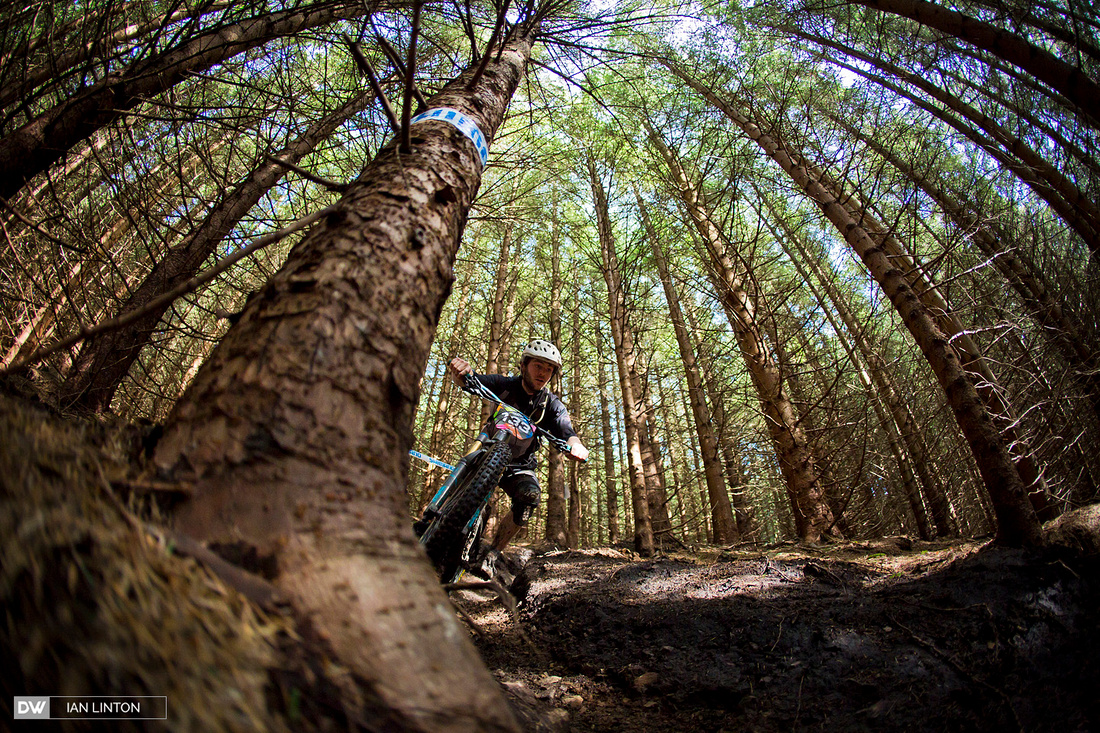 Stage 2 started on the boundary trail then once you got up that wee climb dropped you into hush hush, from there on in you just rip down one of the best trails in Glentress. This spits you out onto the fire road and then a lung busting ride down deliverance to the bottom and you were done, a good old 8 minutes of sapping energy spent.

Winner of the masters and local ripper Gary Forrest dealing with many of the fast flat berms on deliverance, he spent most of the day with the head down knowing that there was a Olympian XC rider Grant Ferguson hunting him down, he’s no slouch when it comes to riding techy trails with a bit of pedalling involved. 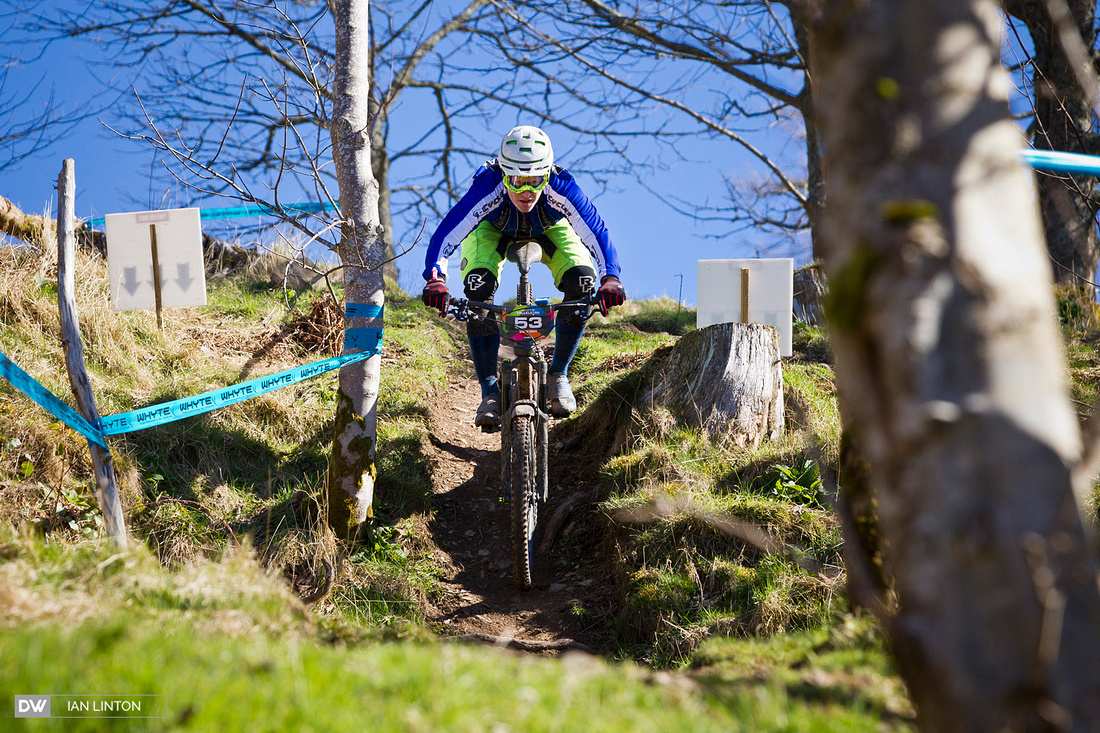 Good to see local I-Cycles bike shop owner back on the podium, turning the ripe old age of 50 hasn’t slowed hime down one bit. Mind all the training for those puffer races and Keilder chiller’s probably helped out on the fitness needed for this weekends race. 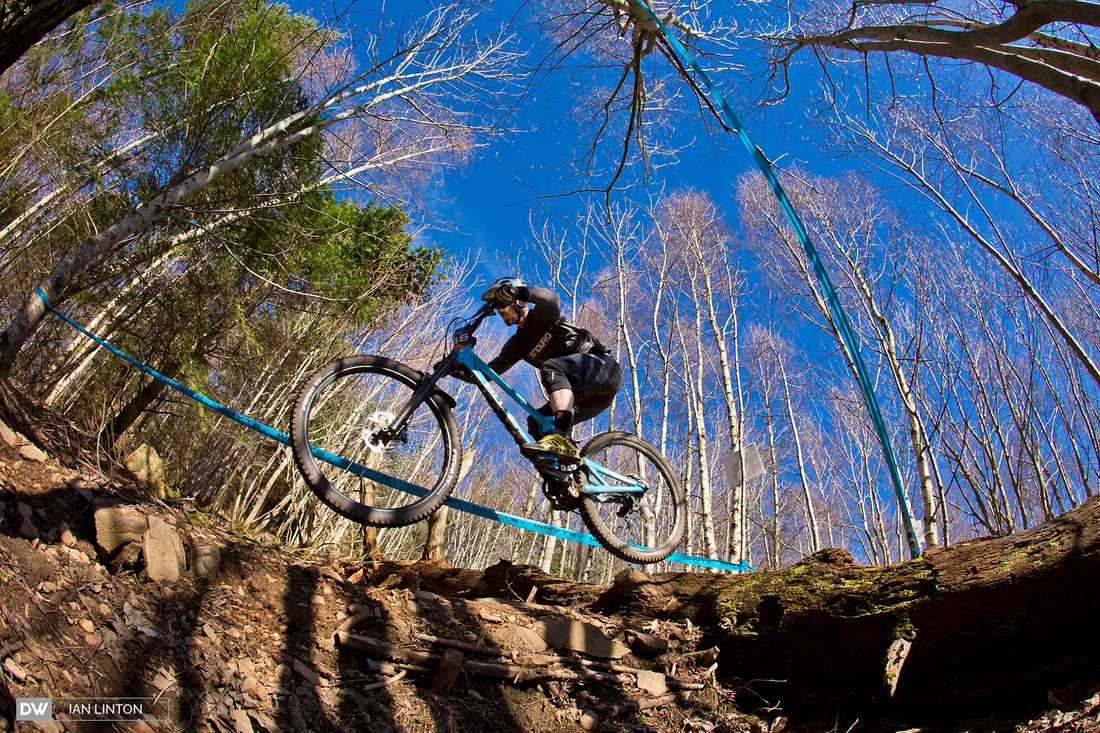 Did I mention the blue skies? I actually got a bit of sunburn on the Saturday sitting around at the bottom of stage 4. Spotted this new Pole being piloted around by Trevor Worsey, good solid 31st place buddy. 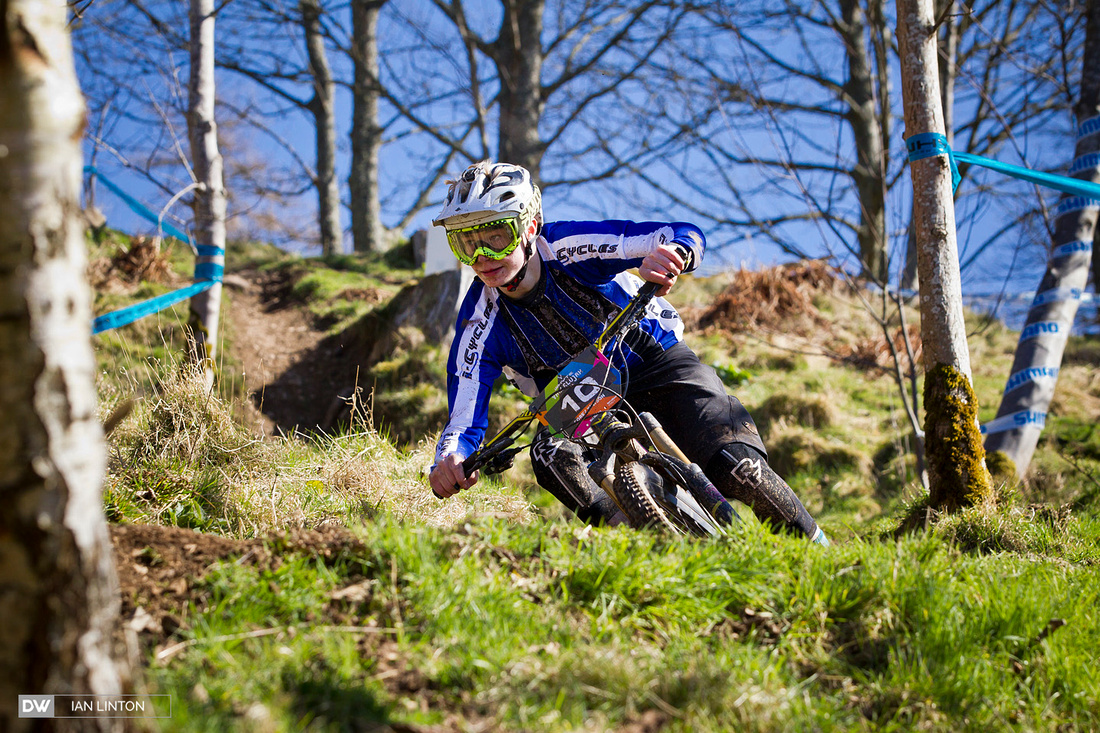 Winner of the hotly contested junior category Corey Watson riding for his new team I-Cycles aboard a new Mondraker Dune. He had a big crash on stage 1 and in his words “rode like an idiot for the rest of the day” Would seem that’s all he needed to do to win though. 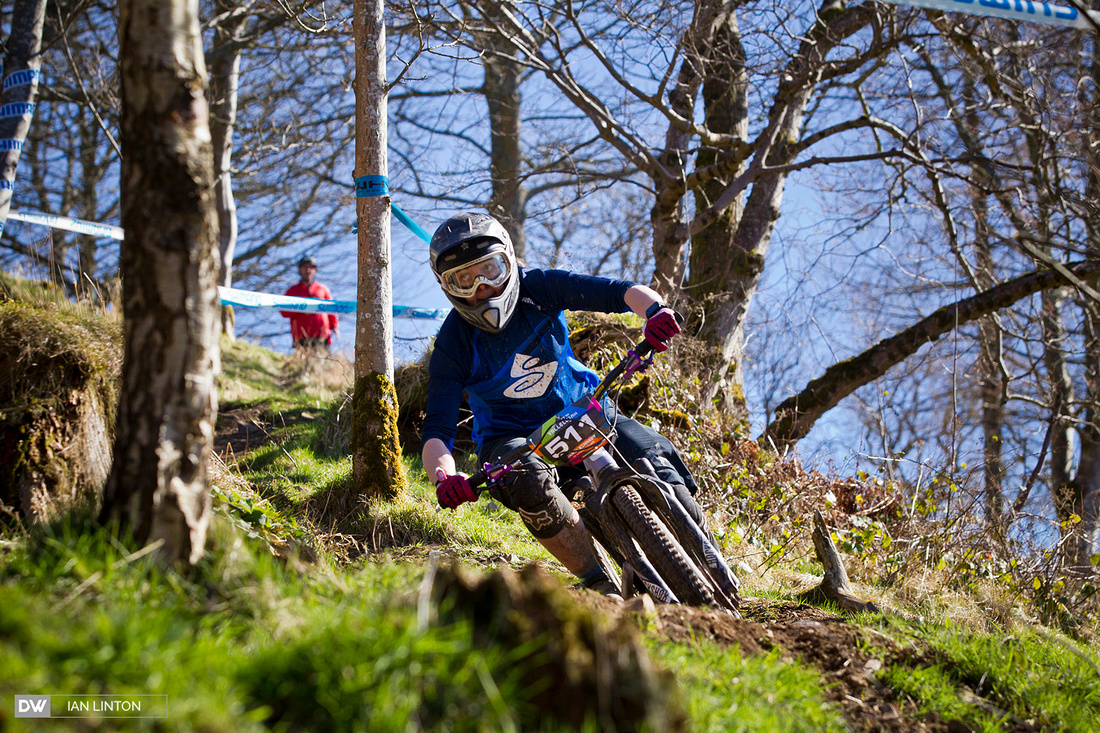 Janey Kennedy took the women’s win by a healthy 31 seconds over Roslynn Newman with Emma McRobb/Neale in third which kinda made good for that evening as hubby Gaz took third in the masters. 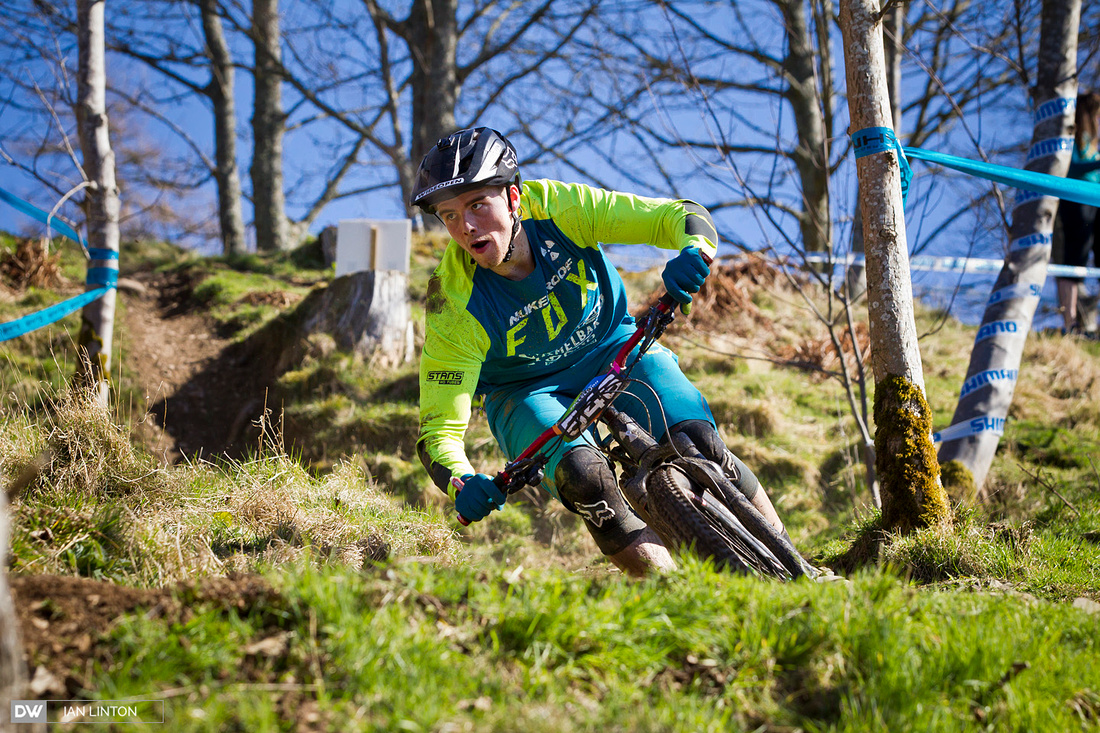 Wideopen Magazines rider Kelan Grant popped over from Belfast on Friday night and after a nights sleep in the back of the car hit the trails on Saturday morning for a practice. He enjoyed the trails so much he headed out and did another lap before dark! Fair play to the lad as this set him up for a win in the senior category and a good 80km + riding over the weekend. 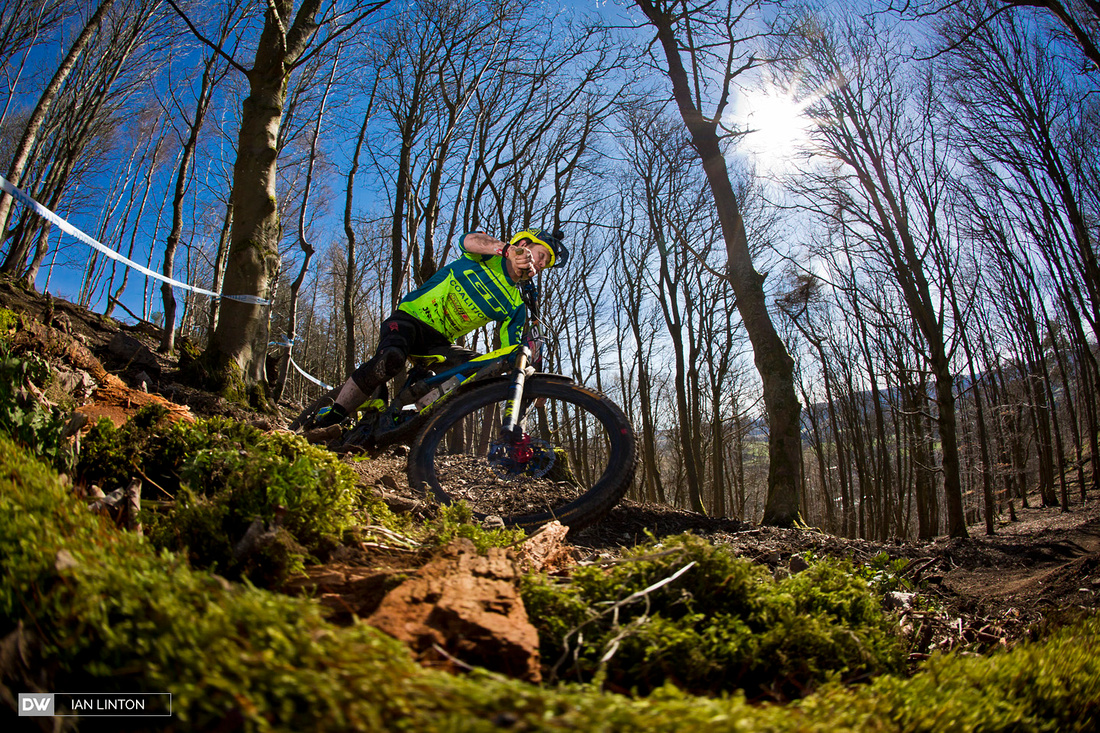 Can I mention those blue skies again? Scouting for trails rider Stephen Hardy rips through the open beechwood on the last stage of the day before dropping into the what most folk said was the best trail of the weekend. Another fine event from the crew of Tweedlove and a huge shout out to all the volunteers that stand out on the trails marshalling and manning the feed stations etc, without you folks it just couldn’t be done. Roll on June for the International which is part of the Tweedlove festival – are you entered yet?